The Journal of Justice/Volume 1, Issue 31 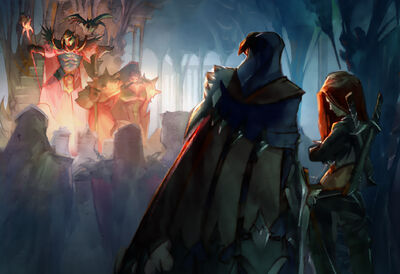 Katarina and
Talon arrive in Noxus to witness
Swain’s coronation as Grand General.

Jericho Swain defeated Keiran Darkwill in a duel contesting the leadership of Noxus last night, winning the support of High Command. Despite rumors of involvement with the Institute of War’s scandal in Kalamanda, Swain has been named Grand General—the highest position in Noxus.

High Command remained divided in support between the two men since Swain returned earlier this month. Keiran Darkwill challenged Swain to a duel to settle the dispute, claiming that such a standstill was a “coward’s game.” Many members of High Command believed this to be a strong move and expected Keiran, a notoriously skilled duelist, to win.

Onlookers reported that Keiran initially had the upper hand and gradually forced Swain into a corner. “He had the Master Tactician against the wall,” stated one witness. “I heard him say ‘watch closely,’ and he vanished—then reappeared behind Keiran. Swain dragged him to the ground and locked the poor fool in his snare spell.” With Keiran immobilized Swain called General
Darius, his most prominent supporter, to his side.

The gathered members of High Command unanimously agreed to swear loyalty to the Master Tactician. With none remaining to protest his claim, High Command named Jericho Swain Grand General of Noxus. “It was the finest demonstration of power I have ever witnessed,” stated Chancellor Malek Hawkmoon. “Swain rose to the challenge of his opponent, used his wit and cunning to best him, and demonstrated his ability to command. Noxus under Jericho Swain’s rule shall be powerful indeed.”

While High Command has embraced his rule, Swain’s leadership remains controversial in Noxus’s lower houses. Some accuse Swain of willing participation in Heywan Relivash’s scheme to obtain Kalamanda.
Katarina, the Sinister Blade herself, commented: “He gave Kalamanda to the League in exchange for power in Noxus. A bold move. A strong move. The strong may rise to power here, but this wouldn’t be Noxus if there weren’t always others with the strength to challenge them.”

Quinton Groat
Reporting From The Institute Of War

Authorities arrested Heywan Relivash earlier this week after an investigation of his residence revealed his involvement in the Kalamanda scandal. The uncovered evidence also implicated Ralston Farnsley, the senior editor of the Journal of Justice, as a co-conspirator in Relivash’s scheme. Both men were apprehended while seeking asylum in Noxus and now face trial at the Institute of War.

A joint investigation led by
Jarvan IV and
Katarina Du Couteau traced the evidence found in Demacia to Relivash. At his residence investigators uncovered a model of the DSS Excursion, and coded notes detailing its sabotage, validating the evidence discovered in Demacia earlier this month. “Relivash had been trying to frame Noxus all along,” commented Katarina. “He put us and Demacia against each other—all so the League could claim the nexuses in Kalamanda!”

Among the evidence uncovered was a collection of communications between Heywan Relivash and an unnamed contact, referred to simply as ‘RF.’ Upon further investigation, the dates of these communications lined up perfectly to events in Kalamanda.

“The Journal of Justice was used to pass secret and coded information from Heywan to participants in the conspiracy, and Ralston Farnsley was his primary contact,” explained Jarvan IV.

Authorities apprehended Relivash and Farnsley after
Talon, acting independently, tracked them to the outskirts of Noxus. They were brought into custody before they could seek asylum within Noxus’s walls. Relivash and Farnsley’s network of co-conspirators included many authors of the Journal of Justice. Arrests of these contacts will continue over the coming weeks as evidence is further reviewed.

Despite the arrests made, outcry against the Institute of War in the streets of Demacia and Noxus continues. In response to the rising tension, High Councilor Vessaria Kolminye made this statement: “Citizens of Valoran, the League of Legends promised your protection, and in that we have failed. Yet in the wake of these events, we must remain strong. We must not allow the selfish actions of one man to tear apart what we have built. We cannot succumb to war when we have committed ourselves to lasting peace. Stand with us and we shall rebuild.”

Final Thoughts from the Journal of Justice Staff[edit]

Kaldera Carnadine
At The Institute Of War

Well, faithful readers, this is it: the end of the Journal of Justice. Our Editor-in-chief Ralston Farnsley’s involvement in the Relivash scandal has removed us from the Institute’s good graces. So we’re being shut down. None of us saw this coming—well, most of us, because I hear Henril Dreving was arrested an hour ago. The rest of our staff aren’t frantically changing their names and fleeing to Piltover for a getaway blimp to Bilgewater, so I’m hoping that we don’t have much more to hide.

Since our former editor-in-chief is currently being held prisoner at the Institute of War, there aren’t exactly any rules to follow this issue. Many of us of us wanted to thank you for your continued support. So I rallied those of us who hadn’t already packed up their quills and headed home—yes, even L.B. Briskes. He’d tell you it cost me a bottle of Rabble Rouser V.S.O.P. and a promise to never bother him again, but answer me this, summoners: what’s one jaded, melodramatic, endlessly vain writer without an audience to marvel and sigh ponderously at his every word?

Ram Steed showed up at our office the other day for the first time in months, ready to “spread the truth” and “tell the whole story.” When I told him he’d only get one more chance to do so, he went red as a rigged hexplosive and started writing immediately.

And of course Richor and Aria will never hesitate at a chance at the last word.

That’s it, then: Kaldera Carnadine, signing off. Thank you for everything, summoners, and farewell!

L.B. Briskes
At The Institute Of War

“All good things must come to an end” appears to be the mood of the day. It began when I found that some indignant staff member had (in an act of long-suppressed resentment) poured upon my office floor the full contents of my guest bar, my desktop aperitif, my second drawer whiskey flask, my hollowed-runebook cognac, my false statue vino backup flask, and my trapdoor moonshine. Then, as I sat broodingly imbibing the last of my artificial plant vase bourbon, I was informed that the propagandist drivel my fellow journalists have masqueraded as a reliable news source was, to my surprise, in fact propagandist drivel. I was then informed that I would be allowed only a few hours to remove any cherished belongings from the office. I informed the messenger that this would be a pointless pursuit without the aid of a mop.

So it seems that my time as the sunny relief of our dubious publication is nearing its end.

Though I have, in many instances, insisted that I would rather administer exfoliant to the

Baron Nashor or involve myself in an intellectual debate with
“Doctor” Mundo than actually work for my living, I would like to take this final moment to reiterate the point. This is liberation at its truest. I’ve already engaged Olivia to schedule a sampling tour of the vineyards of Northern Ionia. I have also dispatched a note to a fellow author named Lain, who writes what I can only describe as distilled leachate for a competing rag. He details how I will be basking on coastlines around Valoran unfettered by deadlines, or word counts, or moral restraints while he struggles to form cogent written thoughts. I think I may keep a new journal of sorts outlining my exploits with only the modicum of poetic license that I regularly reserve for myself, just to harrow him.

Anyhow, Olivia is currently regarding me with an expression that might be characterized as “caustically contemptuous” and my vase has dripped its final drop. Farewell my helplessly adoring masses, you will be missed... by my now unemployable colleagues. I, on the other hand, am merrily off to retrieve my emergency tree trunk liqueur!

Our duty here has come to an end, Summoners! The League has spoken, and the voice of the people falls silent. The perfidy of Ralston Farnsley and his cohorts has placed a black mark upon this office, and so, leaderless, those that remain shall retire to our respective principalities.

For all you true sons of Noxus, consider this your rallying call. The League of Legends has shown that even their halls are not impenetrable to anarchists and conspirators. Only one bastion remains for the ranks of the faithful. The banner men are gathering in the halls of your homeland. Embrace this new era under the watchful eyes of the raven!

I will not waste what small space I have here on frivolous words. The situation is dire: despite the faith we’ve placed in its leaders, the Institute of War has proven itself a duplicitous and unjust ally.
Swain, the Master Tactician, has risen to power in Noxus, uniting the High Command beneath what any true Demacian knows to be his tyranny. In these grave times, Demacia must stand alone. We can rely on nothing but our own ideals, our own convictions. We must stand against the conniving greed of the Institute of War and the endless bloodlust of the Noxian war machine.

Our light, just and true, must drive back the darkness. Stand proud, citizens, and strike at the heart of injustice itself.

Ram Steed
At The Institute Of War

Greetings friends, Runeterrans, countrymen! It is I, Ram Steed, and I have returned. Let me assure you that the rumors about me have been true – I have been silenced! Until now! Kaldera has given me leave to once again take up the quill in service of the Journal of Justice and this reporter is unafraid to kick the steaming piles of offal they called management and yell, “Finally! You couldn't have fallen soon enough! Too bad you had to destroy this bastion of journalism on your way down, you snakes!”

Oh, all those months ago. I was barely recovered from being made
Shaco's pin cushion, fired up and ready for action. And where was that action? Kalamanda. This reporter used his keen intellect and relentless investigation skills to dive straight to the heart of the matter – and I found it. Before I could bring this world-shaking news to light, High Councilor Heywan Relivash and his conspiratorial goons got me and laid the blackest of blackmails to keep me silent. No longer!

Good riddance, Ralston Farnsley! Even if you weren't a blackguard, you wouldn't know real journalism if it bit off your leg! Rot in your dungeon, Heywan Relivash! Thank you for finally revealing the disease that festers in the heart of the League! And to the rest of you who've participated in duping the citizens of Valoran, I raise high the famous Ram Steed one-finger salute! Let justice be served!

Keep the faith, seekers of the truth! This reporter is once again unleashed upon the world!