The Journal of Justice/BREAKING NEWS 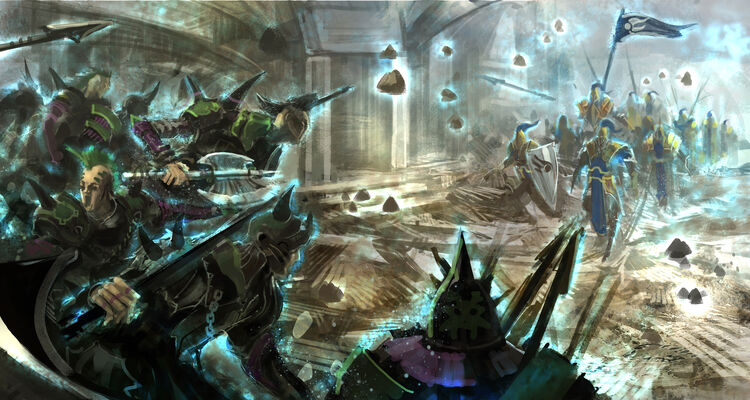 In an unprecedented show of force, the League of Legends conjured a temporal stasis bubble over the entirety of Kalamanda, trapping the warring forces of Noxus and Demacia in a mid-battle state of suspension. The soldiers inside will be extracted and returned to their homes, but the League has pronounced the village and its immediate surroundings uninhabitable.

Last night, the League sent four hundred summoners to the far edges of the Kalamanda conflict, transporting with them a small nexus that was, according to scholars of the Arcanum Majoris, a centerpiece of the Arcanum Vault. Utilizing ancient Urtistani techniques refined by League champion
Zilean, these summoners undertook an enchantment the magnitude of which hasn’t been seen in Valoran since the Rune Wars.

“Our appeals for an immediate cessation of hostilities went unheeded by the rulers of Noxus and Demacia,” stated Kiersta Mandrake, High Councilor, in a public address the following morning. “Never before has the resolve of the League of Legends been so brazenly and frivolously tested. We are not a governing body, we are not enforcers, we are the collective will of the citizens of Valoran, and we demand a new future. Runeterra will not, cannot, support the wanton use of magic any longer, and we, as a people, refuse to accept lives set against a backdrop of war.”

Though aware of the gravity of such measures, League officials decided that definitive action was necessary.

A great deal of care was devoted to ensuring that Runeterra sustained the least possible destruction as a result of the spell. “Calling this spell dangerous is like calling the Guardian’s Sea wet,” said Heywan Relivash, High Councilor of the League and overseer of the operation. “A considerable amount of the ecological danger was instead transferred upon our summoners, as the complete energy of the nexus was drawn and channeled through their bodies. One summoner’s misstep would have likely cost all their lives. Fortunately, no misstep was made. The nexus itself was expended in the process – a treasured artifact sacrificed to minimize the environmental risk. That such a resource was expended to prevent what may have become a ruinous war is at once a tragic waste and the most noble possible cause.”

Though experts believe the damage to Runeterra is minimal, they have determined that the area occupied by the bubble will be magically unstable for decades. Soldier extraction has already begun, and will continue through the coming weeks. It will be a slow and intensive process, as Zilean believes improper extraction may lead to chrono-displasia, a disease he himself endures.

League surveyors have been dispatched to the village to assess the true extent of the damage, as well as to determine if there would be any way to speed its restoration. The League made arrangements for the families of Kalamanda residents, accepting responsibility for restricting them from their own homes.

For now, the war seems to have stopped. Ambassadors from Noxus and Demacia have taken residence in the Institute of War as they negotiate the safe return of their soldiers, as well as terms for a peaceful resolution to this conflict.