Singapore Sentinels are a professional League of Legends team based in Singapore. The Sentinels were formed officially as a team sponsored and powered by Garena as one of six competitors in 2012 GPL Season 1 [1] representing Singapore.

On November 17, the Singapore Sentinels would participate in the 2012 GPL Season 1 after placing second in GPL Season 1 group stage. They first played Saigon Jokers, who placed third in the group stage, and advanced after a 2-0 victory to face Taipei Assassins in the grand finals. The Singapore Sentinels were defeated 1-3 in the best of five match, finishing second over for the Garena Premier League Season 1.

At the end of November, the Singapore Sentinels would travel to Las Vegas to compete in the IGN ProLeague Season 5. After going 1-2 in the group stage to place third in their group, they were seeded into the lower bracket with a first round match against IceLanD. They defeated IceLanD 2-0 and advanced to the next round where they were defeated by Taipei Assassins 0-2, ending their run at IPL5 and placing them 9th-12th overall. 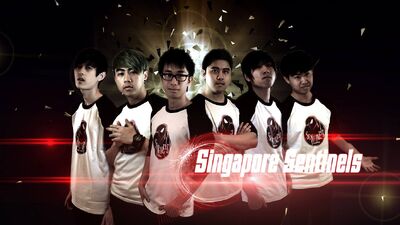