Scryer's Bloom are a type of plant with magical properties, being used for clairvoyance.

Until now, you’d earn half a ward’s worth of gold when your allies destroyed a ward you’d revealed. This caused situations where players would compete for the last hit on wards, rather than getting rid of them ASAP. We’re changing things up so whoever reveals the ward and whoever kills it both get those precious gold coins without having to compete with one another.

New mechanics come with some growing pains, so we’re still clearing up a few odd interactions with plants. Right now we see some room to add clarity and consistency by introducing a few quality of life changes that make the effects of plants easier to predict and read.

WHO PINGED THAT? : Auto-pings on revealed champions have been toned down to be distinguishable from player-issued pings
WARD PING Revealed wards now trigger a small auto-ping

In general, while activating plants uses the basic attack animations, plants shouldn’t trigger combat interactions. In other words, activating plants should feel similar to attacking wards: a tactical action that happens to be done with a basic attack. Two notable exceptions: it feels really bad to have to chase down a Draven axe or Poppy shield after triggering Blast Cone, so we’re cleaning up those interactions.

Patch 6.23
One patch later, everyone’s still feeling out how the new plants fit into their matches. We’re waiting until players have time to integrate plants into their understanding of the Rift before making big changes, but in the meantime, have some bugfixes!

ANTI-ALLERGY : Updated the indicator textures to be less noisy and misleading

Patch 6.22
Introducing plants to the Rift. 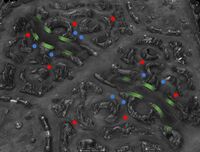 Pre-season is here and with it are new things to explore in the jungle. We want to make Summoner’s Rift feel more alive and that’s where Plants come into play. Plants create new ways for teams to take control of the map and approach objectives, as well as how you engage in future fights. Different plants spawn in on the map during certain parts of the game in order to provide interesting combat situations and rewarding players who adapt to them.

Plants have evolved pretty significantly during their time on PBE, and we’ll continue iterating on them throughout pre-season. We’re excited to see how you use them!

FOLIAGE : Plants are stationary, neutral units with 1 health. Destroying them (via basic attack) triggers an effect.
NURTURE : Plants spawn as inactive seeds and take 60 seconds to become usable. Each seed type has a unique appearance.
FIRST SPAWN : First spawn locations for all plants are pre-determined
SPAWN NATURE : Each plant has its own set of spawn rules - see below
STARTER GARDEN : The first wave of plants is identical in every game

SIGHT BEYOND SIGHT : When destroyed, releases vision-granting pollen in a large cone that flies in the direction the attacker was facing, revealing units and wards for 12 seconds (3 seconds on champions)
AIM THERE : Scryer’s Bloom displays a self-only range indicator to champions on mouse-over, showing which direction the pollen will fly
SPAWN POINTS : Scryer’s Bloom can spawn in two spots per jungle quadrant, close to river ramps
FIRST SPAWN : 3:00 - 3:30, always at each quadrant’s spawn point nearest to the side lanes
NEXT-SPAWN TIME : 5 - 6.5 minutes at either spawn point, starting once a given quadrant’s Scryer’s Bloom is destroyed
NO TWO BLOOMS : Only one Scryer’s Bloom can be present per quadrant
Fandom's League of Legends Esports wiki covers tournaments, teams, players, and personalities in League of Legends. Pages that were modified between April 2014 and June 2016 are adapted from information taken from Esportspedia.com. Pages modified between June 2016 and September 2017 are adapted from information taken from EsportsWikis.com. Content is available under CC BY-SA 3.0 unless otherwise noted.
Advertisement