"Welcome to patch 4.15. While we don't have a whole lot of balance changes going on, wedo have a number of bugfixes and clarity tweaks to smooth out the patch path leading to the World Championships. Also, with so many things going into previous patches (looking at you, 4.13 and 4.14), we also wanted to really see what a stable landscape looks like in League of Legends. There are a number of small buffs for Gnar, but they're more focused as 'feel' improvements to get him in the best possible place (although they're undeniably buffs!). Check out his context for more information!

For features outside of balance, however, there's a lot going on! First up, check out that newly revamped client patcher & landing page. These two visual updates represent phase one of our ongoing development process to improve your pre-game League of Legends experience. There's a lot of nuance that goes into introducing new, stable technology, so be sure to read [dev blog on what's going on behind the scenes].

Final note! As we near final polish on a few parts of Summoner's Rift, we're going to start patching those finished pieces to the live environment. This's being done to minimize the size of the eventual Summoner's Rift launch patch so you all don't end up with massive downloads on the day we go live. In other words, this doesn't mean you'll be able to play on those shipped pieces - and we still don't have an official release date! - just that they'll be pre-emptively sitting on your hard drives. Thanks! "

And that's all for today! Check out all of our patch notes below for the full details!

"We're launching our visual refresh of the patcher and landing page along with the first bits of our new technology in the patcher, which we'll be applying to the rest of the client over time. A few highlights are listed below, but make sure to [to our previous article] if you'd like a deeper dive into these changes.

As a reminder, the patcher and landing page updates are just the first phase of an iterative development process. They represent a foundation we're confident we can safely build on, and we're looking forward to improving other parts of the client over time with what we've learned from developing these releases!" 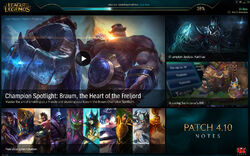 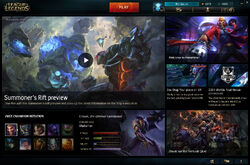 
"When we buffed Alistar back in 4.12, our big concern for competitive play was that he would be too strong in the jungle, where his terrifying level 2 ganks would obliterate all semblance of lane safety on the map. Didn't happen! He just went to terrorize top lane instead.

Jokes aside, it's not a bad thing when a champion finds a new position to play on the map, but often times we'll see their strength being used in inhibitive ways (hello Soraka, hello Lulu). We're not taking large steps against Alistar for now, but we did identify one very obnoxious aspect of his strength where he could get a free high-damage trade by Headbutting his opponent while also sneaking in a basic attack. When combined with next-attack items like Sheen, it's easy to see how uninteractive Alistar can get, especially when he puts the opponent in a position where they can't retaliate in a meaningful way. We still think Alistar's in a very strong place after his buffs, but will continue to monitor him for the future."

Fiddlesticks
We're fixing a bug with Fiddlesticks that got introduced in 4.14 where his drain would occasionally break by one tick.

"It's important to note that the Drain bug introduced in 4.14 was cutting off only one or two drain ticks if the opponent ran away to break the tether. It's not to say that this was a light issue (it was definitely a power reduction and an awkward 'feel' change for Fiddlesticks masters), but we just wanted to clarify the impact this had. To fix this, we actually re-coded certain aspects of Drain, but it should feel the same as 4.14."


"We're documenting the collateral in Collateral Damage (this is now the third time we have used this joke)."

Gnar
Gnar gets his bonus health immediately on transforming (rather than slightly delayed). Boomerang works more logically and its width, speed, and return indicators have all been improved. Boulders now get picked up and thrown faster, and they fly faster. GNAR! has an AP ratio (but please, for your sake, don't try AP Gnar).

"We've been keeping a close eye on Gnar during the past two weeks, and while we try not to make major changes during big learning periods, we did see the opportunity to improve some of his play patterns. In other words, while these are definitely buffs, they're more 'spritual improvements' that we'd like to do regardless of power. So even if Gnar ends up being too strong (or too weak), these are changes we're making to get him to feel better, and future tuning points would be unrelated."


"Part two of three. Around here is where most would make a joke about Lee Sin being blind. We will not."

"Heat management is what separates the good Rumbles from the great Rumbles, so when we heard of bugs that punish Rumble for playing at his best (and a few that reward him when he shouldn't be), we felt we needed to act. That said, some of these changes might be a significant buff to Rumble's power, and that'll be something we'll need to keep a close eye on."


"While we realize this is a small power reduction, we had the choice of either buffing Shyvana's late ranks in damage or just reducing her level 1 damage by 20."


"We're just re-aligning the visuals on Sivir's Q to better match the actual hitbox of the spell (but it's still a small buff!)."

"We're just doing a bunch of small changes aimed at helping Urgot get back onto his... feet. While we try not to discuss our changes in the context, the big thing here is the mana refund on Acid Hunter, which will give Urgot a better fallback mechanic when it comes to last hitting."


"The hidden power of support Xerath. "


"As we've mentioned previously, the splash art team is engaged in a long-term effort to update our oldest base splashes. We've got a few more fresh updates for this patch. "


"Don't let us prevent you from being inefficient with your unique passives."


"Cheaper Essence Reaver. Bam. Summary and context in one."


"We think players should be able to shop in the comfort of their own death, without the stress of tipping their hand to their opponents."


"These days, double AP comps have been very dominant in the meta, so we're trying to reduce those that focus on non-stop push / waveclear."


"Miasma can be a bit overbearing on Twisted Treeline. This change, combined with the nerf to TT's mana regen aura, should make her more reasonable."


"Solar Flare is a game changer, and with easy access to a number of tanky cooldown reduction items on these maps, her ult is up a little too frequently."


"Jarvan has great base stats and gets to build a ton of damage items while still remaining fairly tanky. We don't want to take away his utility, so we're focusing on his damage potential instead."

"We're adding a new tier to ranked play and announcing end-of-season rewards. [out the announcement for more info.]"

"We've made some incremental performance improvements this patch, resulting in a small framerate boost across all configurations."

The following skins will be released at various times during Patch 4.15: