Moscow Five, abbreviated as M5, is a Russian esports organization. This page details the team's history when it was considered an EU team. For the CIS team, see Moscow Five.CIS.

Founded in 2001, M5 had roots in Counter-Strike 1.6, WarCraft 3, FIFA, and DotA. In December 2011, Moscow Five recruited the players of Team Empire, who had qualified to compete at IEM Kiev.[1] This team went on to be a dominant force in the European League of Legends scene throughout Season 2. Following the July 2012 arrest of Moscow Five CEO Dmitry "ddd1ms" Smelyi, the organization released its League of Legends team in January 2013 due to lack of funding. [2][3]

The organization acquired the roster of Russian Force in August 2014.

Moscow Five's first major appearance was at IEM Season VI - Global Challenge Kiev on January 19, 2012. Here, Moscow 5 made their international debut by going undefeated in the group stage against Dignitas, against All authority, and Sypher.[4] Moscow Five advanced to the playoffs and took the first round series 2-0 against SK Gaming. In the finals, Moscow 5 defeated North American favorite and powerhouse Team SoloMid 2-1, dropping their only game of the tournament.[5]

Nine days later, on January 31, 2012, Moscow Five competed in the online Kings of Europe tournament. Once again showing their strength, M5 went undefeated in the group stage, defeating SK Gaming, exGBT, and Team Mistral.[6] Advancing to the playoffs, Moscow Five then defeated French team Sypher 2-1 in the semifinals. From there, M5 advanced to the finals and faced Counter Logic Gaming EU (CLG.EU), where they would fall 1-2 and finish second.[7]

On March 10, 2012, Moscow Five attended the IEM Season VI - World Championship in Hanover. Reproducing their results from Kiev, M5 gave an outstanding performance in the group stage, going 5-0 by defeating SK Gaming, Curse Gaming, Team SoloMid, Sypher, and EHome.[8] M5 continued their win streak in the playoff bracket, beating Counter Logic Gaming Prime 2-0 in the semifinals and defeating Dignitas 2-0 in the finals to take home first place.[9] This tournament marked a high point in Moscow Five's history, as they were able to not only win the tournament, but did so without losing a single game.

Moscow Five's next high placing at a major tournament was at the online Corsair Vengeance Cup. Coming out of the group stage of the tournament 2-1, M5 had a strong run in the playoffs, defeating Hauteur 8, Intent Gaming, TeamRedByteItalia, and MeetYourMakers before falling to against All authority 0-2 and being sent to the loser's bracket. In the loser's bracket, Moscow Five won 2-1 against Team SoloMid and then 2-0 against SK Gaming, setting them up for a rematch against aAa. This time Moscow Five emerged victorious, defeating aAa 2-0 and receiving a spot in the grand finals against Counter Logic Gaming EU. Moscow Five did not continue their earlier success, falling 0-2 and taking home second place.[10]

On June 16, Moscow Five attended DreamHack Summer 2012 after taking second at the online qualifiers. M5 took second in the group stage going 2-1, defeating Absolute Legends and Mebdi's Minions while losing to Counter Logic Gaming EU. Advancing to the semifinals, Moscow 5 faced off against Curse Gaming EU, coming out ahead 2-0 and advancing to the tournament's finals, where the Russian team again played Counter Logic Gaming EU and lost 0-2.[11]

On July 28, 2012, Moscow Five attended European Challenger Circuit: Poland after qualifying online with a 2-0 victory over CLG.EU. This meant that the teams would meet again in the group stage, where Moscow 5 took second place going 2-1 after defeating EloHell.net and Ocelote World (x6) while losing to CLG.EU. In the semifinals, Moscow 5 dominated Curse EU 2-0, including a perfect 15-0 score in the second game. In the finals, Moscow 5 once again met rivals Counter Logic Gaming EU. Despite having a 1-6 record against CLG.EU in previous tournament finals, Moscow 5 were finally able to claim revenge with a commanding 2-0 victory and become the ECC Poland champions.[12]

At the Season 2 World Championship in October, Moscow Five was considered by many analysts and professionals to be the favorites coming into the event.[14] As the European champions, they were given a bye through the group stage and were selected to face Invictus Gaming in their quarterfinal match. Although iG consistently pressured M5's early game and won the laning phase, the Russian squad was able to overcome their deficits in the midgame and take the series 2-0. Advancing to face the Taipei Assassins in the semifinals, M5 continued their dominant form in the first game of the match and quickly secured game one. However, TPA matched M5's aggression in the next two games and successfully turned the series around. The Taiwanese team took the set 2-1, and Moscow Five was forced to settle for 3rd-4th place and $150,000 USD.

Moscow Five attended the European tournament Tales of the Lane from October 27 through November 11, 2012. They earned first place in their group stage 3-1, with wins against Curse EU, Eclypsia and MYM and a loss to IWantCookie. Because they finished first in the group stage, Moscow Five was granted seeding directly into the semi-finals.. On November 11 M5 traveled to Paris to compete in the offline portions of the tournament. There M5 was upset by Curse EU 0-2, knocking them into the third place match. Moscow Five completed the tournament with a sweep of SK Gaming, taking third and €5,000 in winnings.

On November 22, 2012, Moscow Five flew to Shanghai to attend the TGA Winter 2012 event. While not contestants of the tournament itself, the team looked to boost their popularity with the Chinese tour, doing photo ops, fan signings and Mandarin greeting videos.[15][16] M5 also played two show matches against WE and iG, winning against both. They departed China on November 27, flying directly to Las Vegas to attend IPL 5.

On Day 1 of the IPL event, Moscow Five advanced through the group stages by defeating Curse Gaming twice and dropping a game to Taipei Assassins. They then faced World Elite, who they had scrimmed heavily against in Shanghai. However, WE routed the Russian team 2-0, dropping them to the losers bracket. M5 then defeated the tournament favorites Azubu Blaze in a close three game series. In the fifth round, M5 got a chance to revenge their loss in the Season 2 World Championship against the Taipei Assassins. Despite Alex Ich amassing 538 creep score and leading in gold to the very end of the game, Moscow Five still fell to the Taiwanese team in game one, and lost again to a strong performance by Stanley on Nidalee in the second game, marking five consecutive loses to TPA. M5 finished the tournament in fourth place and earned $3,000 USD in winnings.

On January 10, 2013, the League of Legends roster was released from the eSports organization due to lack of funding. The previous year's arrest of Moscow Five CEO Dmitry "ddd1ms" Smelyi had left the team without enough money to stay with the organization.[17][18] The team members of Moscow Five, Alex Ich, Darien, Diamondprox, Genja, and GoSu Pepper, went on to join Gambit Gaming soon after. 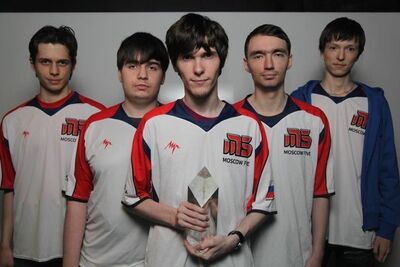