Lemondogs, commonly abbreviated LD, is a Swedish e-Sports organization which is very well-known for its storied presence in the Counter-Strike competitive scene. Its presence stretches to Counter-Strike: Global Offensive, Shootmania, Call of Duty, StarCraft II, FIFA and League of Legends.

Lemondogs was founded in 2004 with the goal to gather gamers all over Sweden. In 2009 they won their first major tournament in competitive E-Sports. Their Counter-Strike team was victorious against SK Gaming at the Dreamhack Finals.

In 2013 they took a major step in their growth by acquiring a professional League of Legends team.

The team achieved tremendous success in their first season of the League of Legends Championship Series. They were able to finish first in the EU Summer Split and placed second in the Summer Playoffs. With their second place finish after losing to Fnatic 1-3, Lemondogs qualified to represent Europe alongside Fnatic and Gambit Gaming in the Season 3 World Championship in Los Angeles to compete for the $2,000,000 US Dollar prize pool.

LD was placed into a group with the OGN Summer winners, SK Telecom T1 2; 2nd seed from China, OMG; popular NA team Team SoloMid; and fellow European Wildcard winners GamingGear.eu. The group proved quite tough for the Lemondogs, ending third in their group with a record of 3-5 with two wins against GG.eu and one against TSM. After a tough fight they were not able to place in the top two teams in their group to advance to the quarterfinals, and ended their season playing on the world stage against the best, placing ninth in the tournament.

After their early success in the EU LCS and making it to the S3 Championships, the roster of Lemondogs had major changes in the pre-season. In the months following the championship, the entire lineup left the organiation, leaving for other opportunities. On December 10 2013, LD's new roster was revealed consisting of Myw, ImSoFresh, ShLaYa, Crazycaps, and Zeriouz. Their fresh team's first test as a unit would be the exhibition between the LCS leagues, the Battle of the Atlantic 2013. There, the Lemondogs were defeated by Team SoloMid 2-0. 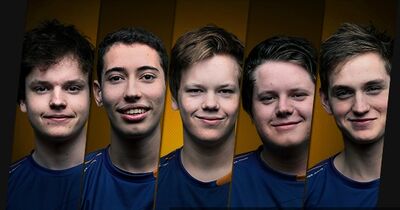