Founded in 1999, Evil Geniuses is a North American esports organization and one of the oldest in the world, that has had a collection of players/teams over a multitude of games such as: Counter Strike 1.6, Counter Strike; Global Offensive, DotA 2, League of Legends, Quake Live, StarCraft II, Super Street Fighter IV, and World of Warcraft. In late 2012 to the start of 2013, Team EG had started looking for a roster to support in the League of Legends scene. The organization formed their first League of Legends team in January 2013 with the acquisition of the former Counter Logic Gaming EU roster.[1]

On January 25, 2013, Evil Geniuses marked the launch of their League of Legends division with the indirect announcement of their acquisition of the former Counter Logic Gaming EU roster through the promotion video, This is who we are. This is how we play., featuring Snoopeh. [1][2]

The team's roster had been well known worldwide Season 2 for being a dominating force in Europe. Season 3 brought change for the players, participating under the fresh brand of EG in Riot's competitive league for North America and Europe, the EU League Championship Series. The team played against the continent's best teams/players over a 10 week competition, completing a respectable season with a record of 15W - 13L, claiming the 4th spot going into the playoffs. In the first round of the EU LCS Season 3 Spring Playoffs, EG.RaidCall won their best of 3 against ex-Copenhagen Wolves then lost to Fnatic in the Semifinals. Fighting for a 3rd place finish in the spring split, the team battled SK Gaming and despite falling behind early game, the players' Season 2 style of delaying until end game was enough to win EG 3rd in a 2-0 victory. Evil Geniuses was automatically granted a spot for the upcoming Summer season of the LCS.

EG also went to compete at the IEM Season VII - World Championship in March, however failed to get out of the group stage.

In April 2013, the Evil Geniuses top laner Mike "Wickd" Petersen achieved a phenomenal feat, breaking the record of a personal stream by having over 130,000 concurrent viewers on TwitchTV, streaming a best of 5 1v1 against sOAZ to determine who would play as the top laner for the EU LCS Team at All-Star Shanghai 2013. [3] The results ended in a 3-2 loss for Wickd.

Later the same month, the team's own Peter "Yellowpete" Wüppen was publicly voted as the EU AD Carry representative for the EU LCS Team, allowing him and other players voted to compete in the All-Star Shanghai 2013 tournament against All Star teams of various regions. The EU LCS team placed 5th at Shanghai.

On July 16, 2013, Evil Geniuses made their first starting roster changes in 2 years.[4] Those changes have been announced in Reddit by the hands of Snoopeh who introduced Shacker to be tested in Evil Geniuses starting squad to see how the team improves with this breath of fresh air, he tell too the reasons behind the changes of the starting roster and mentioned that the decision of stepping down temporarily to a substitute role was made because of his recent perfomances. nRated was announced as a new substitute that will be playing with team in scrims and alternate with team's starting support Krepo, as well as working as an analyst for the team. The team finished third in the Summer Split after a memorable tiebreaker game against Gambit Gaming for third place where Froggen and Krepo swapped roles - Krepo flashed back to his Season 1 mid-lane main days and picked Froggen's signature
Anivia while Froggen played support
Blitzcrank while the rest of the team picked an area-of-effect team comp that wound up decimating Gambit.

In August 25, 2013, Season 3 ended for Evil Geniuses with a loss to Gambit at the third-place match of the LCS Europe Season 3 Summer Playoffs. With this Evil Geniuses secured their spot at Season 4, but missed the chance to participate in the Season 3 World Championship.

In December 2013, Evil Geniuses moved the gaming house to America and acquired the spot from Velocity eSports at the promotion stage for taking a spot into NA LCS. However, mid laner Henrik "Froggen" Hansen and top laner Mike "Wickd" Petersen left the team and formed Alliance to acquire the Evil Geniuses's spot in the EU LCS.[5] 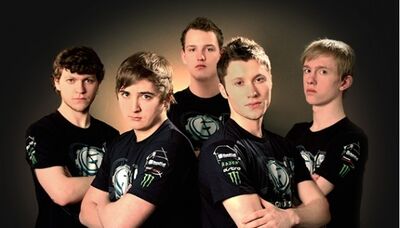