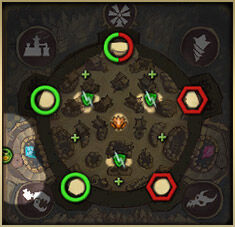 The Crystal Scar is filled with a sandstorm significantly reducing vision for all players, and movement is restricted within the map - the outer circular lane is blocked off, champions cannot recall, and the path from the fountains to the map is blocked off.

The map also adds some features not present in the Dominion game mode: Most notably, the Ancient Ascendant form of Xerath is located in the center of the map as a neutral monster. When he is killed, a relic will being descending for 3 seconds before spawning, and a ring will display.

Once the relic has been spawned, it can be picked up, following the rules below:

The relic will expire 15 seconds after descending if nobody has picked it up. If it does, Xerath will respawn as normal. The Ascension buff lasts until the player's death and is not transferred further. The Ancient Ascendant respawns 30 seconds after an Ascended champion dies.

Additionally, the map includes 3 Relics of Shurima, located on speed shrines in the top left, top right, and lower center parts of the map. All players have vision of the immediate area surrounding each Relic. Champions can capture the relics after a few seconds of channeling near it but cannot capture it while being damaged by any units or while moving, or while a player from the opposite team is attempting to channel - similar to capturing turrets on the standard Dominion map. Channel time is reduced for each additional channeling champion beyond the first one. Relics respawn every 30 seconds.

At the start of the game, players spawn at level 3 with 1000 starting gold and a trinket item: the
Golden Transcendence, which becomes available at 45 seconds. The Golden Transcendence's sole purpose is to teleport the player from the fountain to the map, and once used the player cannot return to the fountain except by dying (similar to ARAM). There are three locations each player can teleport to: the top point, the closer middle point, and the closer bottom point. Of these the middle and bottom points are unique to each team, and the top point can be used by both teams.

The objective in this game mode is to be the first team to obtain 200 points: