Aatrox is a champion in League of Legends.

We’re still keeping an eye on the changes to the fighter item system, but it’s clear that Aatrox drew the short sword. This buff should hit the sweet spot.

Champions like Aatrox and Olaf are able to reach a scary state with massive burst healing from items (Goredrinker and Ravenous Hydra) and runes (Conqueror and Ravenous Hunter). The moments where they feel untouchable aren’t healthy, so we’re shifting their healing to be sourced more from their kit rather than from systems.

We've cleaned up some champions' base stats over the years and are rounding out the remaining 99 champions.

Aatrox wants to step into his full potential as the unkillable DPS monster, so we’re helping him harness his darkin power by curbing some of his mid- to late-game falloff. Hopefully now this warrior demon won’t fall flat in late game teamfights.

Aatrox is on the fringes of pro play, hanging on for dear life. Since he’s restrained in that MMR, he has room for us to push him into a much better state for all players.

We overnerfed Aatrox in 9.18 and are giving back some of the waveclear he lost.

Aatrox is still highly valued in pro play, so we're taking another swing at him. We're nerfing his sustain and waveclear at the late laning phase points (around level 7-11) to hit his flexibility in lane matchups and his ability to flex into multiple roles.

Despite the adjustments we've made over the past couple of patches, Aatrox has remained a stalwart presence in pro play. We're making him less reliable as a blind pick with the removal of revives from his ultimate.

MORTAL Aatrox no longer earns a Revive through kills

We're following-up with the changes we made to Aatrox in 9.9 since right now he heals way too often in lane (via his passive) and heals way too much late-game (from book cats and star goats).

Where do we even begin? Since his rework, Aatrox has settled into a diving, one-shot playstyle that’s protected by the guaranteed safety of a revive. Rather than number tuning to make the revive less powerful, we’re making mechanics changes across the board to even the scales between reliable power that's valued in pro and power that's more fitting of Aatrox’s fantasy. Most notably, the revive on his ultimate is much less reliable, freeing up a lot of room to give him buffs (which make up the majority of the other changes here). Overall, this patch pushes Aatrox toward a more bruisery, drain-tanky playstyle and his list of strengths will include more than one, all-in dive combo, accentuating his thematic as a life-draining war machine.

Patch 9.6
Aatrox now pulls targets even when they're untargetable. Passive no longer cancels when reviving.


BUGFIX : Buff icons on the buff/debuff bar no longer show up as blank boxes

BUGFIX : Aatrox now properly pulls targets even if they're untargetable

BUGFIX : Aatrox's passive is no longer removed when he's reviving

Patch 9.3
Health regen increased. Aatrox no longer heals off damage to non-champions. E no longer stores charges but cools down faster than it previously charged.

Where last patch focused on dropping Aatrox's raw power, this patch focuses on exposing more weaknesses for the Darkin Blade. We're trading his ability to sustain off minions for higher baseline regen so he can't fall back as effectively on passive farming to recover from enemy aggression. Removing Umbral Dash's second charge makes Aatrox's skill check for landing all three Q hits steeper and means if enemies can bait his dash, he won't have a second one to use as an escape.

True to his nature as an unkillable ancient terror, Aatrox survived the nerfs we threw at him during preseason and is still savaging both pro and regular play. This patch, we're dropping his damage across the board (higher E cooldown means less reliability on Q) but are especially focusing on his early game.

This mechanic was originally added to let players explore the possibility of jungle Aatrox, which never really took off. Mid Aatrox is now using it in tandem with Smite to create a lead his opponents have no real way to punish, so we're removing it as an unintended lane strength.

Aatrox won't have as long to wreak havoc with the promise of revival during World Ender, but he'll max out the revive heal sooner. A few clarity improvements will help enemies make the best choice when deciding when and if to kill him the first time or wait out the clock to deny the revive.

Our last set of Aatrox changes brought his lane bullying under control, giving us room to improve his scaling into later phases of the game.

We've mostly gotten Aatrox's power level to a good place, but we still need to trim a bit of his laning strength to prevent him from being so much of a bully.

Now that Aatrox players have gotten some games under their belt and mastered his pretty unique spells, it turns out he's pretty strong, especially in lane. We're pulling some of his early game power in exchange for some more late-game consistency.

Aatrox has released weaker than we'd like, so we're adding power into his baseline damage and durability and making some quality of life changes to his E.

Aatrox, the Darkin Blade will bring ruin upon us this patch! Prepare for obliteration with these links: 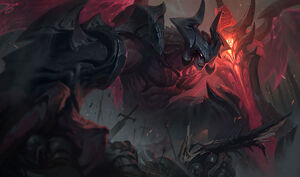 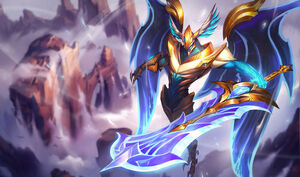 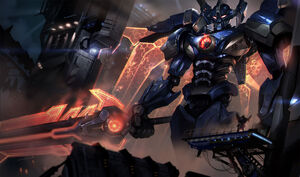 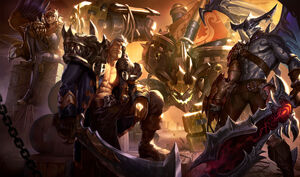 Aatrox is struggling to impose himself in teamfights these days. We're focusing on improving his access to priority targets: Dark Flight is now a more reliable tool for diving the backline, while Massacre’s increased additional attack range will boost his reach as he’s wailing on his foes.

Changing Blood Thirst / Blood Price to be consistent with the on-hit context above, though Aatrox comes with a few extra considerations. The Darkin Blade benefitted from his on-hit bonuses proccing on wards: Thirst is a heal and Price stacks the Blood Well. We discussed special-casing Aatrox to let W continue proccing on wards, but came up against another issue. We removed the ability to lifesteal off wards during preseason, and Blood Thirst’s heal is inconsistent with that change. This shifted the scales back toward standardizing W’s interaction with wards. While the loss of situational utility stings, it shouldn’t critically impact Aatrox’s strength since he can’t control when he has an enemy ward to attack.

Despite some love in patch 7.6, Aatrox is still struggling with consistency (especially in the jungle). His new passive is much more difficult to access in the jungle than the old one, so we’re tuning that. As well, we’re adding some power back into his self-healing to help him feel safer staying in fights.

Between the depth of Aatrox’s changes last patch and the buffs we shipped shortly thereafter, the dust has yet to settle. We’re holding off on targeted balance follow-up until his performance has stabilized, but in the interim, we’re delivering some quality of life changes that should make the revive experience feel more consistent. Also... is it Darkin here or were Aatrox’s tooltips just hard to read? Turns out, a bit of the latter, so we’re doing some cleanup work.


NOT ACTUALLY DRAVE : Aatrox’s full Blood Well buff is now “Hellbent”, not “Blood Rush”
THIS ISN’T EVEN MY FINAL FORM : On reviving from his passive, Aatrox now has a full Blood Well
WAIT FOR IT : Aatrox now no longer loses his third hit from Blood Price/Thirst after reviving
DARK BUT NOT MYSTERIOUS : Aatrox’s passive tooltips rewritten for clarity

These changes are already live; we’re just putting them here as a reminder.

It’s been awhile since we’ve given the Darkin Blade a patch note (to say the least), and we owe Aatrox players an apology for that. We know it doesn’t feel good to hear that your champion is a “game health issue”, and it’s even more demoralizing when we don’t do anything to solve that.

When we have talked about Aatrox, we’ve typically focused on his self-heal based gameplay, and how difficult it is to maintain. Tackling a project that large is something more appropriate for a full VGU or a champion class update, but that focus has led us to neglect Aatrox for far too long. Aatrox has other problems besides the dicey-ness of self-healing, and we’re taking this time to tackle some of those problems. Hopefully, we’ll come out the other side more comfortable giving Aatrox balance tweaks in the future.

As it stands, Aatrox is always perched on a fine line between smashing everything and not having any options at all. His abilities cost health, which makes fighting from behind even harder. And since his healing scales with his damage, building tanky not only hurts his kill potential, but also doesn’t make him that much harder to kill (because he sacrifices healing potential in the process). We want to give Aatrox more to do in the games he’s not running away with. That means making it more rewarding for him to invest some gold in durability, as well as making it less punishing for him to use his abilities.

PS - turns out a certain Glorious Executioner has an ability called Blood Rush. We’ll be fixing the mix-up next patch.

"Aatrox is a champion that seeks to constantly all-in and punish poor positioning by diving head-first into battle, but this has always been at odds with Blood Well's monstrous cooldown. No longer! You should expect Aatrox's early dives to stay as tame as they've ever been, but now his team doesn't have to wait an eternity for him to be ready to throw-down in a late-stage moshpit (what else are you picking an ancient blood-god for, anyway?)."

"Often times Aatrox would find himself wanting to use Dark Flight for a massive knockup into the enemy team, only realizing he didn't have much to be doing once he was in. Whether you're diving the backlines or just brawling the old-fashioned way, Massacre makes sure you've got enough fire in your veins when you decide to dive-kick your way into combat. "

Context: Any champion can be frustrating to play against when they’re capable of building very tanky while still outputting considerable DPS, so we're lowering some of Aatrox’s innate damage. With this change, Aatrox must build items for damage and won’t be able to simultaneously tank and smash face as easily.