ALTERNATE aTTaX is a German-based organization. They were previously known as Team ALTERNATE.

Team ALTERNATE began their venture into competitive League of Legends on July 25, 2011, when they acquired the roster of Competo Sports: Forellenlord, Fisch, unso, Lycades, destruct, CedeoCedeo, and Timson.

In August 2011, Team ALTERNATE competed in IEM Season VI - Global Challenge Cologne. ALTERNATE was seeded into Group A and placed third out of four, going 1-2 by defeating MyRevenge, while falling to Team SoloMid and Millenium. Team ALTERNATE would not qualify for the playoffs, and returned home with a 5th-6th-place finish along with SK Gaming.

At the ESL Pro Series Germany Winter 2011, Team ALTERNATE had a strong showing, placing first in the tournament. In Group A, ALTERNATE placed second by beating Logix and Evoplay, while dropping a game to Team Acer. In the playoffs, ALTERNATE defeated mTw.EU 2-1 in the quarterfinals and Peculiar 2-0 in the semifinals. In the grand finals, ALTERNATE took out Team Acer 2-0 and earned first place at the event.

Team ALTERNATE was unable to directly qualify for IEM Season VI - World Championship, but was still selected as a runner-up. Before the event, Invictus Gaming of China revealed that they could not provide visas for all their players to attend, so ALTERNATE was contacted as a replacement team. ALTERNATE was seeded into Group A and placed fourth, with victories over FnaticRC and Millenium and losses to Dignitas, Counter Logic Gaming Prime, and against All authority. Team ALTERNATE did not qualify for the bracket stage, and received a 7th-8th-place finish with Team SoloMid.

On August 18, Team ALTERNATE participated in the Season 2 European Regional Finals. They were knocked out 2-0 in the first round by CLG EU, finishing in 5th-8th place.

Team ALTERNATE disbanded shortly after the European Regionals. However, on September 24, the organization announced a new roster through the acquisition of Team Eloblade. Two former players, ForellenLord and Leofromkorea, returned to the team via this transfer.

The start of season 3 was pretty rough for Team ALTERNATE. After being disqualified from ESL_Pro_Series_Germany/Winter_2012 they lost sponsors and as a result couldn't attend IPL 5, where they had qualified as Team EloBlade before the roster change. In December, Leofromkorea left the team and was replaced by Jree. With this new roster, ALTERNATE participated in THOR Open 2012 and finished 2-2, placing third out of five. A week later, the team attended IEM Season VII - Global Challenge Cologne, going 0-3 in groups after losing to CJ Entus, Meet Your Makers and CLG Europe, placing 7th-8th.

After ALTERNATE placed 1st-4th in the 2013 Season 3 European Ranked 5s Online Qualifier, they headed to Warsaw in order to qualify for the European Season 3 Spring Season. In January, Araneae took the place of Kottenx as the team's starting jungler. At that month's Season 3 Championship Series Qualifiers, they finished 1-2 and did not exit the group stage after losing to GIANTS! Gaming and the overall favorite Fnatic, despite winning against Anexis eSports.

ALTERNATE qualified for the Season 3 Summer Split at the LCS Season 3 Lille Summer Promotion Qualifier by taking second place, losing only to Meet Your Makers. At the European LCS Summer Promotion Qualifiers, Alternate dispatched Wizards e-Sports Club 2-1, then defeated GIANTS! Gaming 3-2 in a best of five series to qualify for the Summer LCS Season.

Team ALTERNATE took Europe by storm during the first weeks of the summer split of the LCS, opening 5-0 and commanding the top of the standings for six weeks. Although ALTERNATE entered the final week of the LCS ranked second, a devastating 0-5 showing left them tied for sixth, where they won a pivotal tiebreaker against SK Gaming to qualify for the summer split playoffs and maintain their hopes to qualify for the Season 3 World Championship.

At the summer playoffs, ALTERNATE lost a 1-2 first round set to Evil Geniuses, but defeated Ninjas in Pyjamas in a critical 2-1 match to avoid the possibility of being relegated and finished fifth overall.

ALTERNATE returned to the German scene in June and picked up Tick Trick and Duck, who had placed second behind n!faculty in ESL Pro Series Spring 2014. The team qualified for the offline stage of ESL Pro Series Summer 2014, where they faced n!faculty once again but lost 1-2. The roster left the organization in September.

After more than two years, ALTERNATE aTTaX (rebranded in 2016) returned to League of Legends and acquired the roster of Iguana eSports, who had won ESL Meisterschaft Winter 2016 and qualified for the 2017 EU Challenger Series Qualifier.[1] HeaQ had already left the team to join Giants Gaming, but stayed with the team as a temporary substitute.[2]

After a disappointing split in ESLM 2018 Spring, ALTERNATE aTTaX chose to shut down their League of Legends division all together.[3] 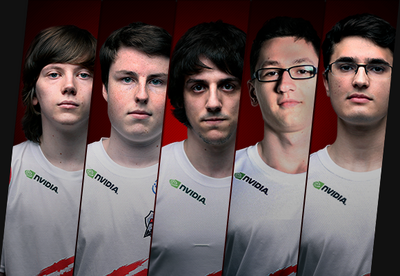